Harry Potter Studio Tour and Hotel Packages 2021. Includes your Warner Bros. studio tour tickets and a minimum of 1 nights stay at your choice of hotel from £75. Book online or by phone. Up to date availability and instant booking confirmation.

A family-friendly attraction, perfect for all wizarding ages

We regret our pre covid ready made ticket and hotel packages are not currently available so we have put together a number of value for money alternative options.

Studio Tour Update : The studio will reopen on 17 May 2021 with new safety measures in place. All visitors over 11 years must wear face coverings during their visit, the tour will be open with reduced capacity to encourage social distancing, some facilities or areas may be unavailable to limit physical contact and all visitors are asked to use cashless payent methods as cash will not be accepted. You can find out more about the current safety measures in place here

Option 1 – Book Tickets and Hotel Separately
Studio Tour Tickets and Hotel from £75
Purchase your studio tour tickets direct from Warner Bros Studios
Book a cheap hotel close to the studio. Hotel Search
Lead in price of £75pp based on tickets for the Harry Potter Studio Tour for 2 adults on 23 May 2021 together with an overnight stay at the Best Western White House Hotel, Watford

Option 2 – Book Tickets including Travel
Studio Tour Tickets and London Transfers from £79
Return transfers from central London to the Warner Bros Studios together with your tour entry tickets (does not include accommodation). Available from Golden Tours

Step behind the scenes and discover where it all began. This spectacular walking tour features original costumes, props and authentic sets that showcase the very best of British film making.

The tour takes place at the original studio site adjacent to the working studios and offers a unique opportunity for fans of all ages to explore the soundstages and backlot filled with the original sets, animatronic creatures and breathtaking special effects.

Tour Duration – Minimum 3 hours. Since this is a self guided walking tour there is no set duration and you can easily spend the whole day at the studios.

See the original props and costumes from the film series

Step inside the awesome Great Hall

Take a stroll along Diagon Alley

Journey through the Forbidden Forest

Visit platform 9 3/4 and step aboard the Hogwarts Express

Enjoy a deliciously frothy Butterbeer in the Backlot Cafe

Marvel at the intricate 1:24 scale model of Hogwarts Castle

Opened on 6 April last year the Gringotts Wizarding Bank expansion is the Studio Tour’s biggest addition to date and has been designed and built by many of the original crew members.

Walk through the wizarding bank of Gringotts lined by towering marble pillars, enter the depths of the Lestrange vault used to store the treasures of Bellatrix Lestrange including the Sword of Gryffindor and Helga Hufflepuff’s Cup, one of Voldemort’s many Horcruxes and so much more.

In addition to the Gringotts Wizarding Bank expansion, Warner Bros. Studio Tour London now has an all-new 17,000sq ft lobby and café serving food and drink inspired by the Wizarding World and can seat up to 500 people.

Getting to the Studio

The Warner Bros Studios are in Leavesden some 20 miles north-west of London close to the M1 and M25 motorways and there is a large free visitor car park directly outside the Studio Tour. 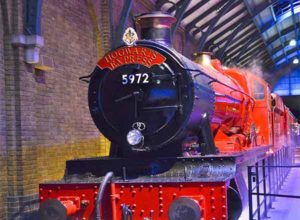 By Car : Use the postcode WD25 7LR for SATNAV which should take you directly to the car park or follow the brown traffic signs labelled “Warner Bros. Studio Tour” once you get close to the studios.

By Train : The nearest station is Watford Junction from where a shuttle bus runs to the studios every 20 minutes. Tickets for the shuttle cost £3.00 at the time of listing.

If you are staying in London and travelled to the capital by train the easiest way to reach the studios is to make your way to Watford Junction and take the shuttle bus. Trains run from Euston, Liverpool Street and Victoria stations to Watford Junction.

A Celebration of Slytherin
Running until 15 September 2021

The Great Hall will be dressed to celebrate a Slytherin victory of the House Cup.

Discover the secrets behind some of the iconic costumes and props belonging to Slytherin characters.

The Great Hall will be covered with over 100 floating pumpkins and a feast of lollipops and appleas dressing the long tables.
This years feature will showcase never before seen additions.

2021 will conclude with the return of the popular Hogwarts in the Snow festive makeover.

Lined with Christmas trees, the Great Hall will see a festive makeover with the long tables laden with a mouth-watering Christmas feast. A blanket of filmmaking snow will cover the majestic Hogwarts castle model and shop fronts of Diagon Alley as part of the wintery transformation. Up-to-date advice on staying safe and healthy abroad plus the latest travel advice from the FCO including security, local laws, passport and visa information >>>